and rescues working together with the increasingly progressive management of Chicago Animal Care and Control. 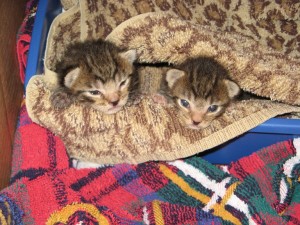 Kittens barely days old like these two need a home environment immediately if they are to survive.

The new law helps save the babies. Thanks to the new early live release ordinance, orphaned  puppies and kittens can now be released immediately into the hands of rescue organizations that care for them in foster homes. No more waiting in the highly stressful conditions of the shelter for 5 days before being released. No more succumbing to disease because they haven’t been alive long enough to develop the resistance adult animals have.  Baby animals are the most vulnerable animals in the shelter AND the most adoptable—if they live. And now they have a better chance of making it out alive than ever before.

Stray cats get a head start on a second chance. The early live release ordinance now allows rescues to take any stray cat (one without identification) into their care on Day 1 of impoundment. Of the thousands of stray cats that come into the shelter each year only a handful are ever reclaimed. Until now, ninety-nine percent plus have been confined to stressful shelter conditions for 5 days before they could be released to rescue groups. Not anymore. The early live release ordinance allows rescues to save just about any stray kitty immediately. (Those strays not taken in by rescues remain at the shelter for the usual holding period.)

Stray dogs have to be a little more patient. For dogs without identification, early live release can take place within 3 days now instead of the usual 5. A shelter environment, no matter how well designed, isn’t as good for any animal as the love, care, and companionship they experience in a home. Now stray dogs can be released to those willing to provide them with foster care on Day 3 of their impoundment instead of spending another 2 days waiting for a former owner who never comes. (Statistics show that if a stray dog is reclaimed, it is most likely to happen in the first 3 days of impoundment. After that, the odds of ever being reclaimed drop dramatically.)

What about dogs and cats with i.d. tags or microchips? Dogs and cats with proper identification aren’t considered strays. Microchips and i.d. tags are the best gift you can give your pet, be it cat or dog. They are the surest way to help your pet find its way back to you should it ever get lost.

What else has changed? Except for the life-saving provisions outlined here, the standard holding periods before an animal becomes the property of the city remain as they have been for many years. Read the new early live release ordinance to confirm this information.

–FCACC is entirely responsible for the content of this message.